Must’ve been the summer of 1983 or thereabouts. My brother and I were headed home from another day at the Decathalon Summer Camp. We sat in the back of the bus with a kid named Ben. I was bouncing on the seat and Ben, without any malice, asked my brother, “Why is he so hyper all the time?”

Now a few days earlier my dad, brother and mom were in the kitchen having breakfast. Dad was trying to read the newspaper and my brother was sitting quietly beside him while I was running around the kitchen in excited anticipation of my favorite breakfast, “bacon toast”, consisting of two pieces of toast smothered with peanut butter and crammed with extra crispy bacon. My dad annoyedly put down his paper and said, “Honey, you’ve got to stop feeding that kid bacon. It is making him hyper.”

So, quite naturally, my brother answered Ben’s question that fateful afternoon: “My dad says it’s all the bacon he eats.” And this little catalyst set off a taunting course, in the way only children know how, of “hyperbacon, hyperbacon, ha ha ha!” The whole bus got into it for a little while and though at the time I felt rather betrayed, after having time to reflect on the experience it became clear that my brother was merely repeating what he had astutely observed among the adults. Furthermore, in the late nineties, it proved to be a useful handle for internet usage.

Periodically I’ve searched for references to hyperbacon, mostly references that have nothing to do with me, and have found them in several places like science fiction writing and fans of Kevin Bacon. So, truth be told, I’ve no idea the legal status of this name just that I came into it quite early and without contrivance.

Currently I teach at a private school, 6th-12th grade. I used to work as a math and science teacher in the Renton, WA public school district. I have had a lot of different kinds of work. After the events of Annapurna Bite occurred I was inspired to work in the field of neuroscience mostly on account of the rabies exposure and curiosity about the brain – the system I chose to focus on during the St. John’s college dissection practica. I was premed in the summers as an undergraduate but never made it to actually applying to medical school. I worked at a UCSF lab at the VA hospital in San Francisco for a short stretch doing small animal surgery, immunohistochemistry, and a variety of molecular biology and genetics experiments. I helped install a neuroscience research lab at the Vontz Center for Molecular Studies at the University of Cincinnati when my P.I. moved to Ohio. Then I went from animal research to working for a card carrying PETA member and Veterinarian doing all sorts of Vet Tech stuff in Santa Cruz, CA. I also worked for the famous (in Europe!) ecological landscaping company Terra Nova, http://www.terranovalandscaping.com , and for a different small company installing residential grid tie-in solar panel systems in California. I worked at a biodiesel factory in Seattle (and have been using B99  from Dr. Dan’s Biodiesel for the last decade).  As a guest lecturer for the Sierra Institute, with a group of about 16, we explored wilderness areas in California. I taught English in Taipei, Taiwan for 2 years and had plans to become a Mandarin translator when unfortunate circumstances forced me to return to the US. I loved living in Taiwan, learning the language and studying the culture. My only culture shock was returning, heavy with grief, to the states and re-adjusting to life here.

I used to be all about surfing, it was my pseudo-religion as an adolescent and served as a fine replacement for church. I don’t get out in the water much since my daughter was born. You’ll find me walking in the woods and making music in my free time. Here’s a link to my rock cover band:

Please enjoy reading excerpts from Annapurna Bite 1997. Someday I hope to publish it as an actual book. Thank you to everyone who takes the time to read it. Your comments are greatly appreciated. 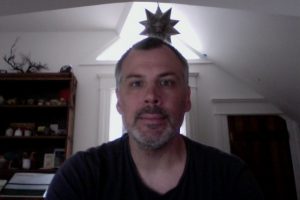